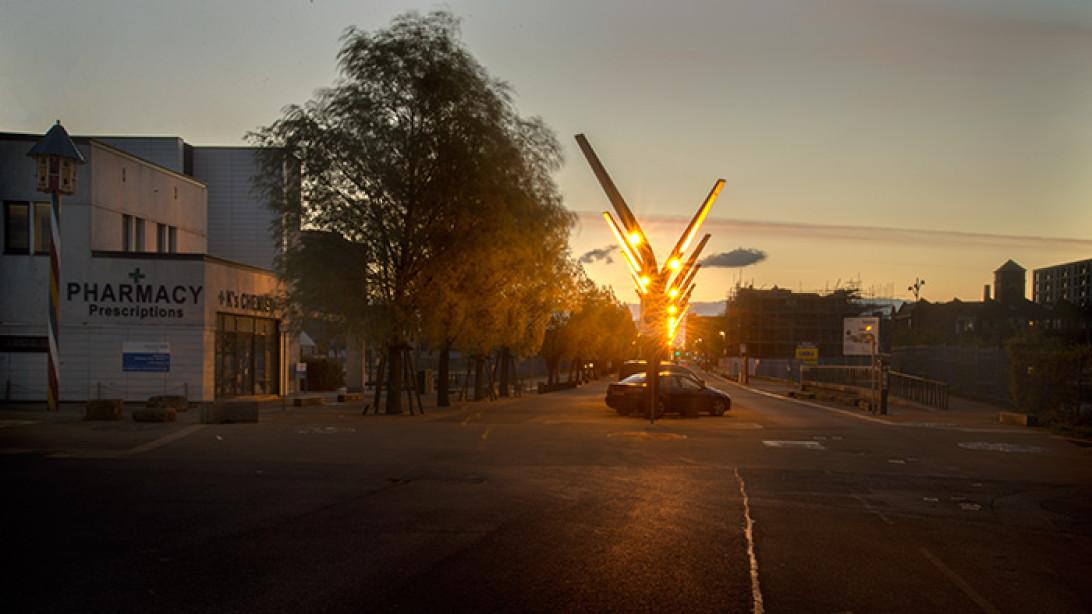 Not Quite Light was inspired by walking in Angel Meadow, just off the city centre of Manchester, where 40,000 people are buried beneath the grassed surface.

It’s where Marx and Engels did their research into the impoverished lives of the working classes. From the glassed new CIS building just across the road, I watched a steady glow fall onto the gravestones of St. Michael’s Flags in the park below.

This caused a simple question to form in my mind: “If this light could magically bring these souls back to life, what would they make of their city today?”.

FROM OLD MILL TO THE END OF EMPIRE

The first Not Quite Light project was called “From Old Mill To The End Of Empire”. The work was done around the north and eastern edges of Manchester’s central district, exploring themes of heritage and restoration.

Here we see Victorian glories collide with the unsentimental drive to modernise and reacquaint the city with economic triumph. The project examines the transition of Manchester’s economic, industrial and spiritual heritage as it builds for the future.

Often, though, the destruction and construction seem ill-thought out. Car parks lie, like dried up lakes where once stood grand brick buildings of industry, and the idea of the new age soothing the injured past seems an impossible thought, despite the glistening lights of recent architecture.

It appears that the council’s policy is to establish the city centre as the focal point for growth, hoping that the new prosperity seeps northwards like ink on blotting paper. However, as the city undergoes its transition, it often feels as if Swan Street and Great Ancoats Street act as a tarmac moat, and that very little wealth has managed to make it across to the north side.

FROM TRINITY TO THE CRESCENT

The second part of the Not Quite Light project was “From Trinity To The Crescent”. Salford and Manchester are separated by the Irwell and in recent years there has been a frenzied building programme along both borders as each authority flexes its new economic muscle. This set of photographs explores the historic connections between the two cities, and looks at how redevelopment is changing the relationship between both cities.

FROM WELLINGTON TO THE BANK OF ENGLAND

The final Not Quite Light project, which completes the ring around the city centre, and will connect Regent Road in Salford to edge of New Islington, where the older established neighbourhoods still exist. The infamous Wellington pub was closed after a shooting, and has now been demolished, whilst the Bank of England on Carruthers Street has been boarded up for some time. The names are redolent of our colonial past, and a time when Manchester was in its industrial pomp. This work was begun in Autumn 2019 and will be completed about 12 months later.

The Not Quite Light projects have not only led to several long term commissions, but also an annual festival and monthly radio show on Reform Radio.

“You Live With Us, We Live You” – commissioned by 5 Plus architects and published as a limited edition book in September 2017.

Waiting for the early bus, outside the Wing Yip su

A shadow, never known to me #NQL #Dusk #Salford