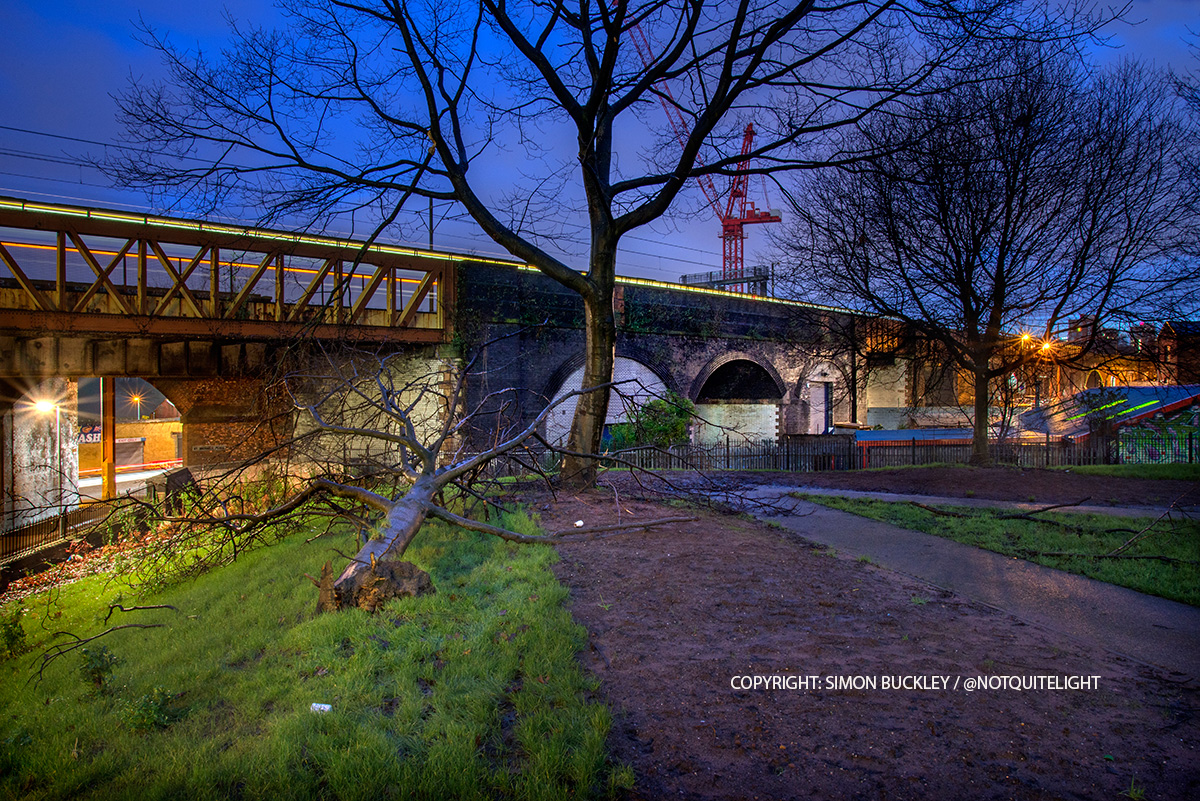 It’s been nearly a year since I started this incarnation of Not Quite Light. I was led to the idea by walking the unfamiliar streets around Irk Town, thinking of the lives buried under the turf of Angel Meadow which rests under the constant heat lamp glow of the CIS building.

I’ve grown 12 months older now. Exploring my city in detail has brought me knew knowledge and a love and understanding of Manchester’s history and future that often escaped me in my younger years. I also may now take for granted the intimacy I’ve forged with the paths and lanes that I visit at dawn, watching Manchester evolve. Nothing remains the same for long.

On this morning my friend Pete Tomkies, a film maker, joined me to observe me working, as he’s going to create a short film about the work. Pete doesn’t do mornings. He has the sleeping habits of a teenager, staying up into the night working on things that he loves, whilst listening to music with the enthusiasm of a curious child with a new chemistry set. And so he rarely sees daybreak.

I was already photographing when he arrived, inspired by the thought of company on my shoot. “I can’t believe how many people are awake and on their way to work” he said as he prepared his camera. His eyes sparkled at the beauty of mixed light and soft mist that clung to the old, tiled bridges that shoulder the trams and trains. I felt like an old hand as he spoke.

I moved in and out of shadow, now commentating on what I was doing so as to help him in his approach. I was amazed at how much I now had buried in my brain after doing the photographs for this long, but listening to Pete I couldn’t help but once again be affected by the enthusiasm of someone seeing it all for the first time.

We moved up to Angel Meadow. Again, his sheer energy at discovering a new experience was infectious. The speed of the light emerging after a certain point in the cycle, his laughter as I correctly identified which street lamp would go out first, all caused me to reconnect with the self that had begun this project with no sense or care of where it would lead. We both stared into the distance, acknowledging the history and coming change to this part of the city.

In the distance a crane rose above the old railway arches. Plans are already being discussed in offices and restaurants for the redevelopment of the area. A woman walked past holding the hand of a young child, indicating the evolution of the park from place of fear to one of relaxtion. “Are you going to take some beautiful photographs of the trains?” she asked as if I was also a child. “I hope so.” I replied, smiling. “I really hope so.”