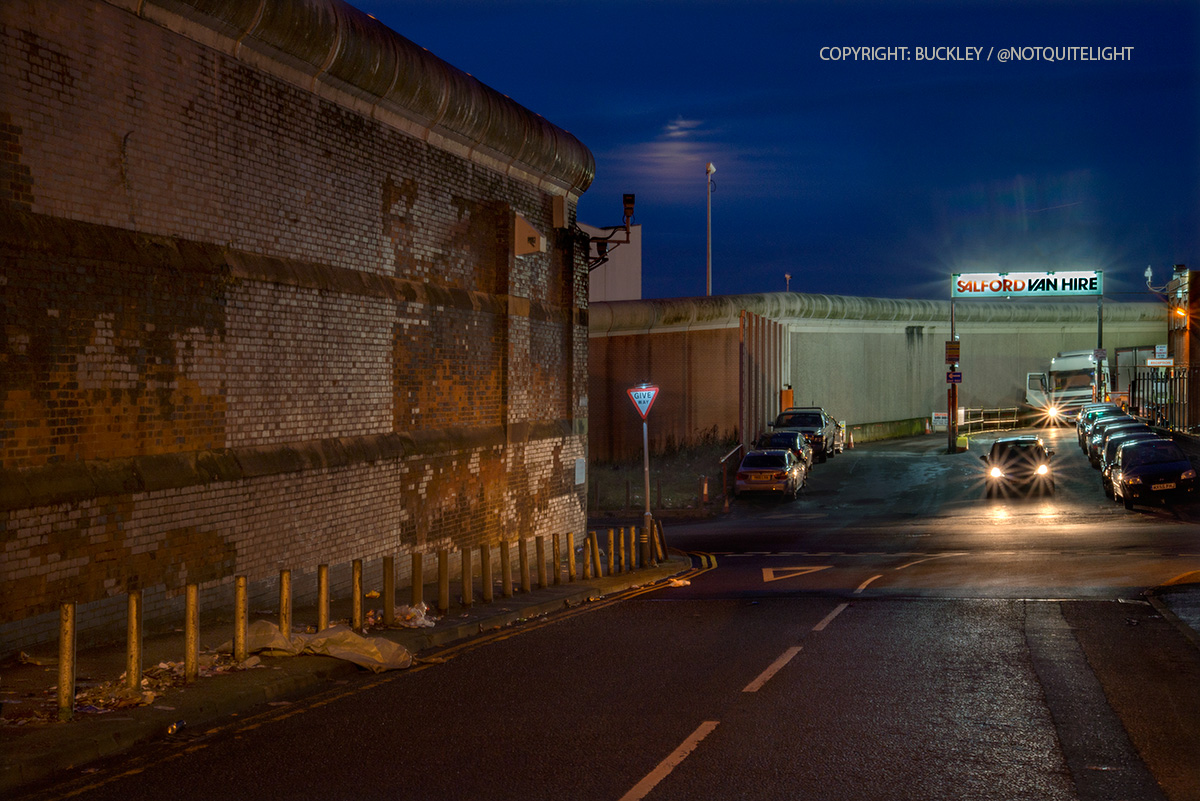 The dawn promised little. It was overcast, leaving the buildings below to supply the colour. When it’s like this the day is often slow to start, giving me time to consider what it is that I want to photograph. “From Old Mill To The End Of Empire” is very nearly at its end as a ‘stills’ project and so I decided that I would go to Empire Street, which forms one of the boundaries that I’ve set for myself. It’s a strange thing to do to constrict yourself with self-made rules, however, I’ve steadfastly kept within the confines that I’ve created.

Empire Street runs along one of the outer walls of Strangeways Prison, and ends up at the gates of Salford Van Hire. It’s kerb is lined with the trucks and cabs of vehicles waiting to go out for the day. Several of the drivers told me off for not wearing the right gear, which in their case meant a hi-vis jacket. One of them was Harold, a man maybe in his late fifties. He told me he’d found himself working at the company for over 20 years. He was following my gaze up to the high, barbed wire topped wall of the gaol as he spoke. 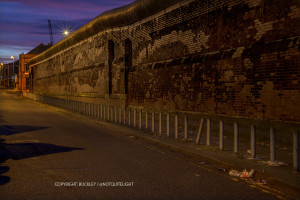 “Funny working next to Strangeways” he said. “You hear ’em sometimes, calling from window to window. And their friends, or relatives, or whatever stand here and shout up too. Me and the missus parked nearby the other night. We were going to a show. She noticed all the rubbish in the street.”

I have a friend who thinks that Strangeways will be demolished. It’s no longer fit for purpose, and it sits on prime real estate. Criminals can be housed somewhere else, away from the skyscrapers and apartments now stealing slowly into the old city. I looked to the far end of the high wall. Dawn was suddenly and unexpectedly quite beautiful, although the sun was too low for the prisoners on the other side to experience what I was seeing. A CCTV camera spun round and trained itself on me as I lingered and gazed at the glowing sky. Lorries started to leave the depot, travelling to who knows where across the country, free to go wherever they wanted, as long as they stuck to someone else’s rules.