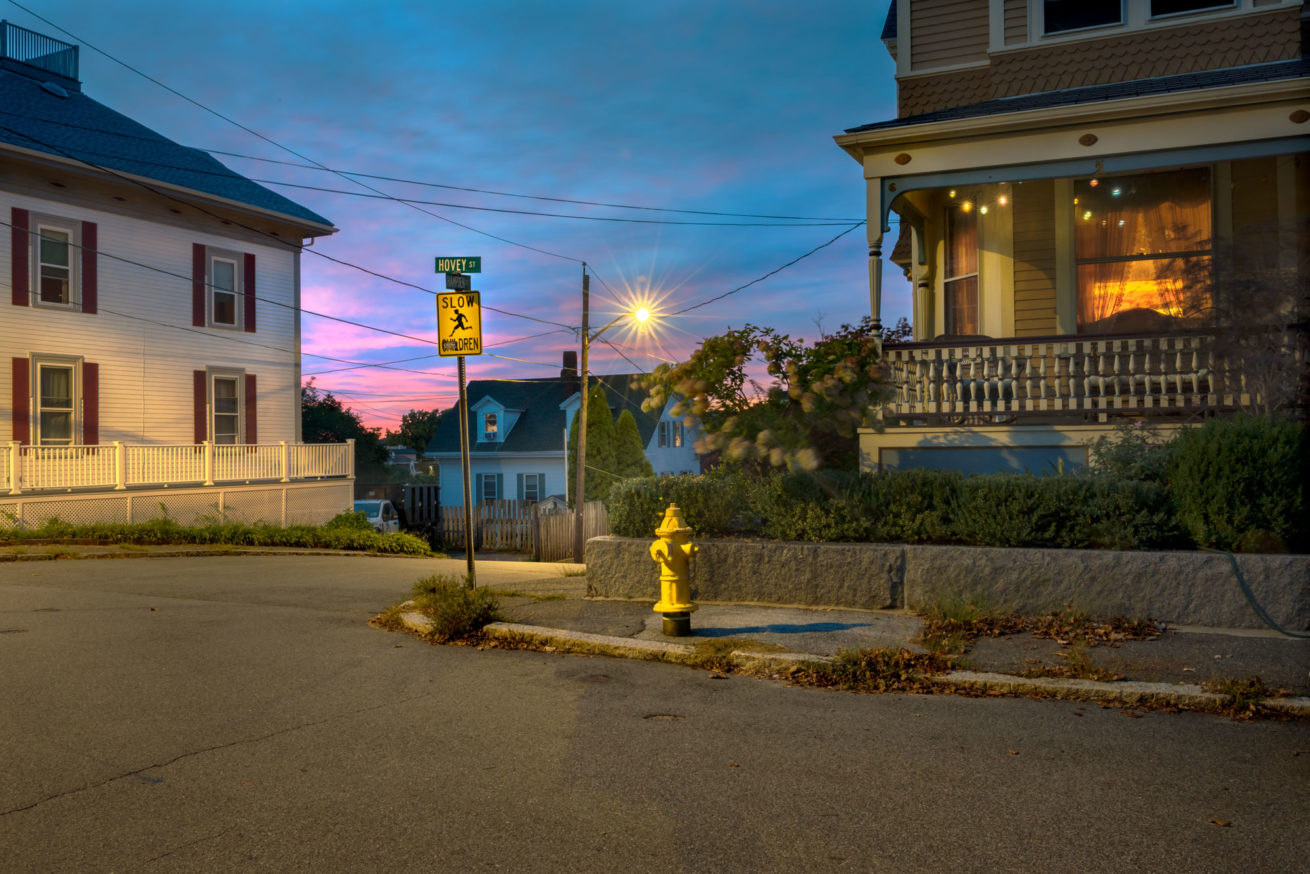 It’s strange, that which sits in our minds, quietly influencing us without us knowing. I was near the top of Hampden Street in Gloucester, where it’s topped neatly by Hovey. It runs steeply downhill, and affords a view of other toytown houses sprinkled on the hill opposite. In the evening, the sun sets behind the houses.

Instinct had brought me there, not a guide book, and I was sure I’d found just the place to take my photograph. A black tom cat came over to me from the house opposite. It fussed around my legs and allowed me to tickle a strongly defined chin. Crossing back to the yard, he stretched, his stomach pushing down towards the tarmac, his back forming a curve towards the dusk sky smooth as a satellite dish. I sat back in my car, feeling smug, and waited for the streetlights to come on.

As the day dimmed, and the lamps began to glow, it quickly became obvious that my picture wasn’t going to work. The patch of light created on the road was in the wrong place, the houses remained unlit. The street seemed empty. The only indication of life was the scent of meat being cooked on a barbecue, somewhere on a porch way down out of sight.

I looked up, and saw two Egrets flying overhead, causing me to turn and walk around the corner, following their flight. The elegant white birds circled above before disappearing towards the sea. The obvious viewpoint that I’d originally chosen was gone and, where I was now standing, a scene like an Edward Hopper painting emerged before me, pretty as a picture. I set myself, and pressed the shutter, content as the cat that I’d stroked.

The following day, I was chatting in a bar with a friend I’ve made here called Aaron. He has a long beard, and unblinking blue eyes. I could imagine him as a civil war soldier, under a skewed Yankee cap. I told him about where I’d been.

“You didn’t know that Edward Hopper painted here, in Gloucester?” he said, surprised.

“Well, he did, and you just about stood right next to one of those houses. How about that?”

It’s strange, that which sits in our minds, quietly influencing us without us knowing.

Simon Buckley is a Manchester based photographer. Not Quite Light explores regeneration and heritage, photographing the architecture of the city.