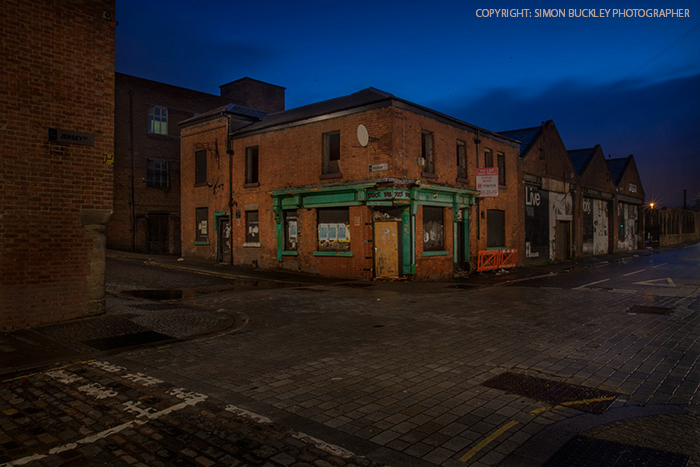 I was at a friend’s house recently and Scooby Doo was on. I noticed that the drawings of the deserted buildings were often depicted in the half light, with deep blue skies and vivid foreground colours. The sets were remarkably claustrophobic for a show loved by children, with no hint that there was another world beyond the blocked shadows.

The first 2 days after the onset of British Summer Time brought gales that caused an unearthly high pitched whining through the streets. Above my head, as I walked around Ancoats, “To Let” boards flapped like dud football rattles, and empty cans scuttled along cobbled gutters. A spectral wind rattled windows and banged secured gates. The vast Victorian buildings of Jersey Street defeated any traffic noise from Great Ancoats Street, and humped bridges denied lengthy views down connecting streets.

In front of me, suddenly, was the old Cross Keys, oddly lit as if on a film set. The pub had survived long enough to have had a satellite dish installed. A single light came on in the building behind as I read the word “Dancing”, painted in a jaunty manner above the door. All I could think of as I pressed the shutter was Shaggy leaping into the dog arms of Scooby.

COPYRIGHT BELONGS TO SIMON BUCKLEY PHOTOGRAPHER. NOT TO BE USED FOR COMMERICAL GAIN OR TO BE PRINTED. ALL USEAGE MUST BE ACKNOWLEDGED.