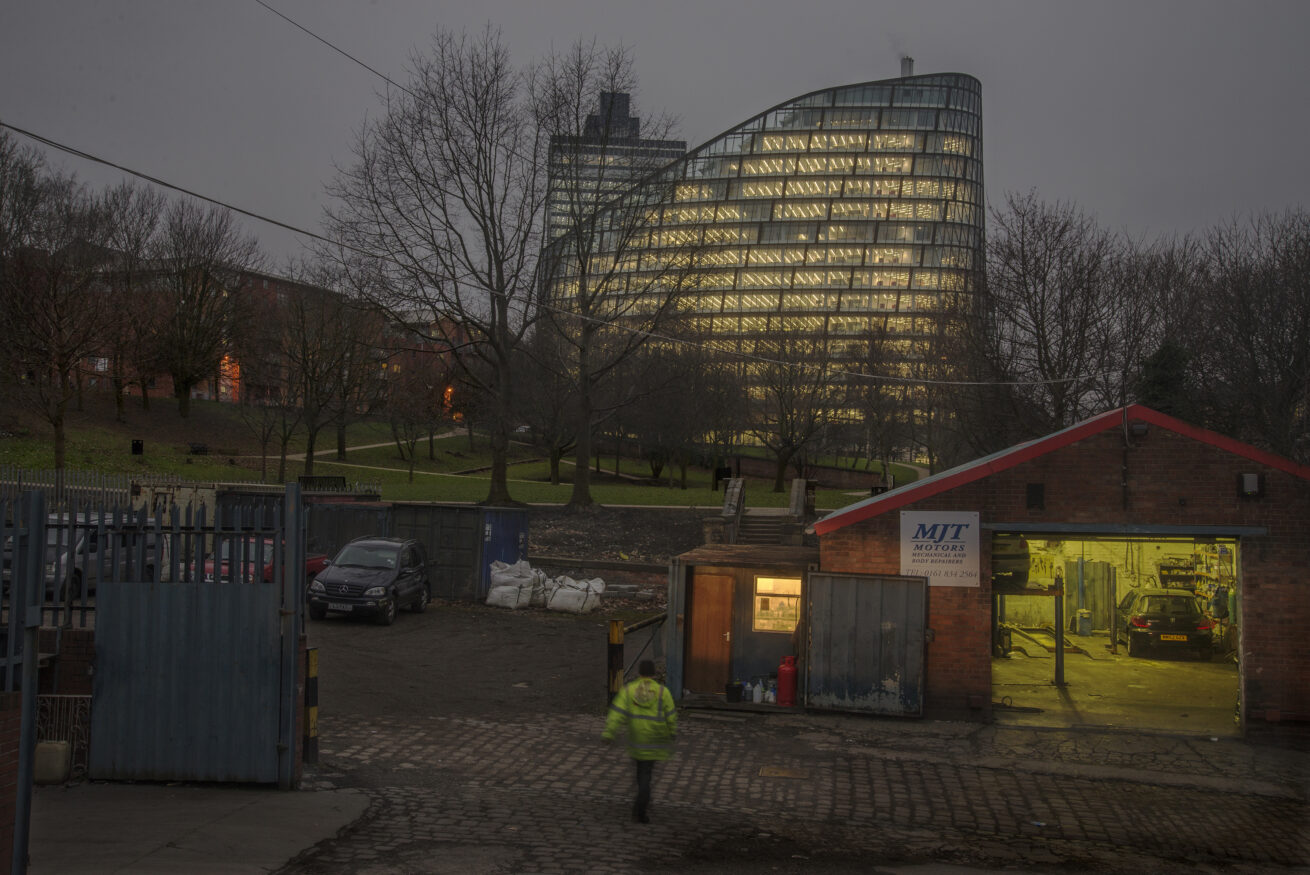 My flatmate has a dog, an English Bull terrier. He’s a dapper man and reminds me a little of Bill Sykes as he proudly walks his pet through the Victorian streets behind Angel Meadows at night. Walking around the district that we live in is what has inspired Not Quite Light, as we talk about the history of the streets and buildings, and of our thoughts towards the encroaching modern world. In many ways, this small area is at the core of the project.

Angel Meadows, now one of the few public green spaces in Manchester city centre, is really a graveyard with 40,000 bodies lying beneath, and you still have a real sense of the city as it used to be before glass buildings became the norm.

I was down near the railway arches at the bottom of Gould Street, looking back towards the new Co-op bank building. Before me was an old house that is now used as offices by a security firm, and to my right were railway arches occupied by car mechanic businesses.

A bearded man, dressed in traditional, oil stained blue overalls, saw me setting up my tripod and came up to me to ask why I was taking photographs. He was called Mike, of course, and he’d been working as a mechanic in that arch for over 35 years.

He pointed to the house and said “Lowry painted that, and the steps over there, just behind MJT Motors.” He went back into the arch and proudly brought out an A4 local history booklet, produced sometime in the 1980s. It was called “Working Class Housing in 19thC Manchester, The Example of John Street, Irk Town, 1826-1936” and was by Jacqueline Roberts. The price was £2. The book was clearly well read.

Mike wiped his hands on his hips and returned to work. I picked up my tripod and walked over to MJT motors to see more clearly the steps that Lowry had painted, that went from the yard where cars are made well again, up to Angel Meadows, now dominated by the lights of a bank.

COPYRIGHT SIMON BUCKLEY / NOT QUITE LIGHT – NOT TO PRINTED OR USED FOR COMMERCIAL GAIN.

ALL USEAGE MUST BE ACKNOWLEDGED @NOTQUITELIGHT