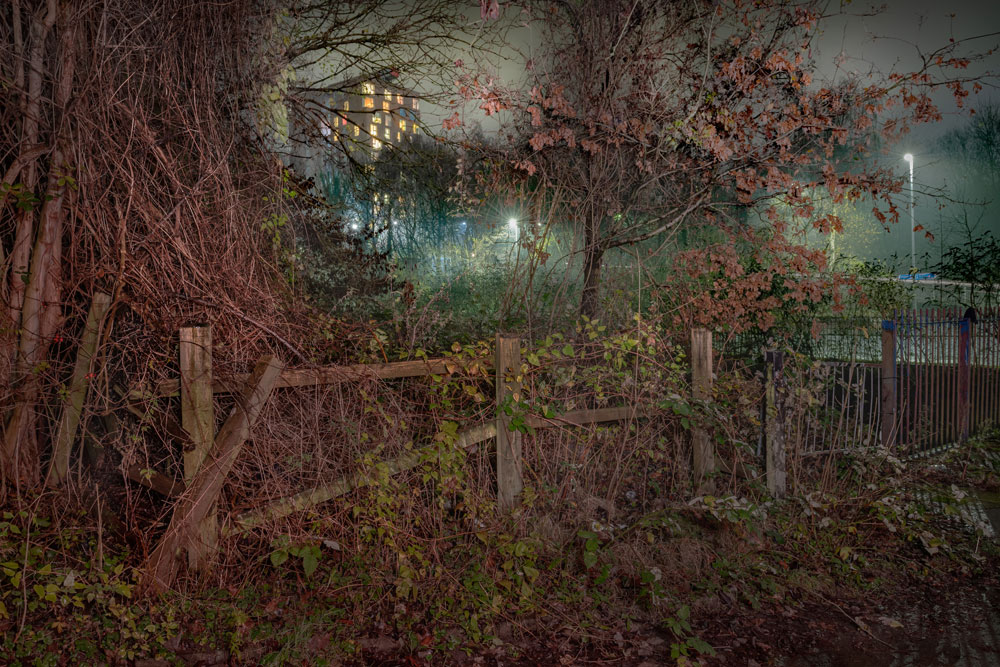 A feature written for the second edition of Shock City, whilst

working on my project, “Dark Days, Luminous Nights” for the Manchester Collective.

I was originally going to write about one of the many walks I’d taken during the first lockdown, journeys often over10 miles that either led me into unexpected spaces, or that reconnected me with old ways not taken for far too long.

I was going to talk of encountering the disused Mather and Platt foundry towards Newton Heath, slowly decaying alongside the Rochdale Canal, and how that building, rather then the city centre Factory development, ought to have been our city’s grand creative space, adopting a vision that looked beyond the tarmac moat of the inner-ring road, and followed the ethos of Thomas Horsfall in seeking to make art accessible for as many of our citizens as possible.

And then, on one recent Sunday evening just before midnight, I found myself in Collyhurst, on Smedley Road, near the railway viaduct below Batty Street, taking photographs of the Irk Valley for a project commissioned by the Manchester Collective. 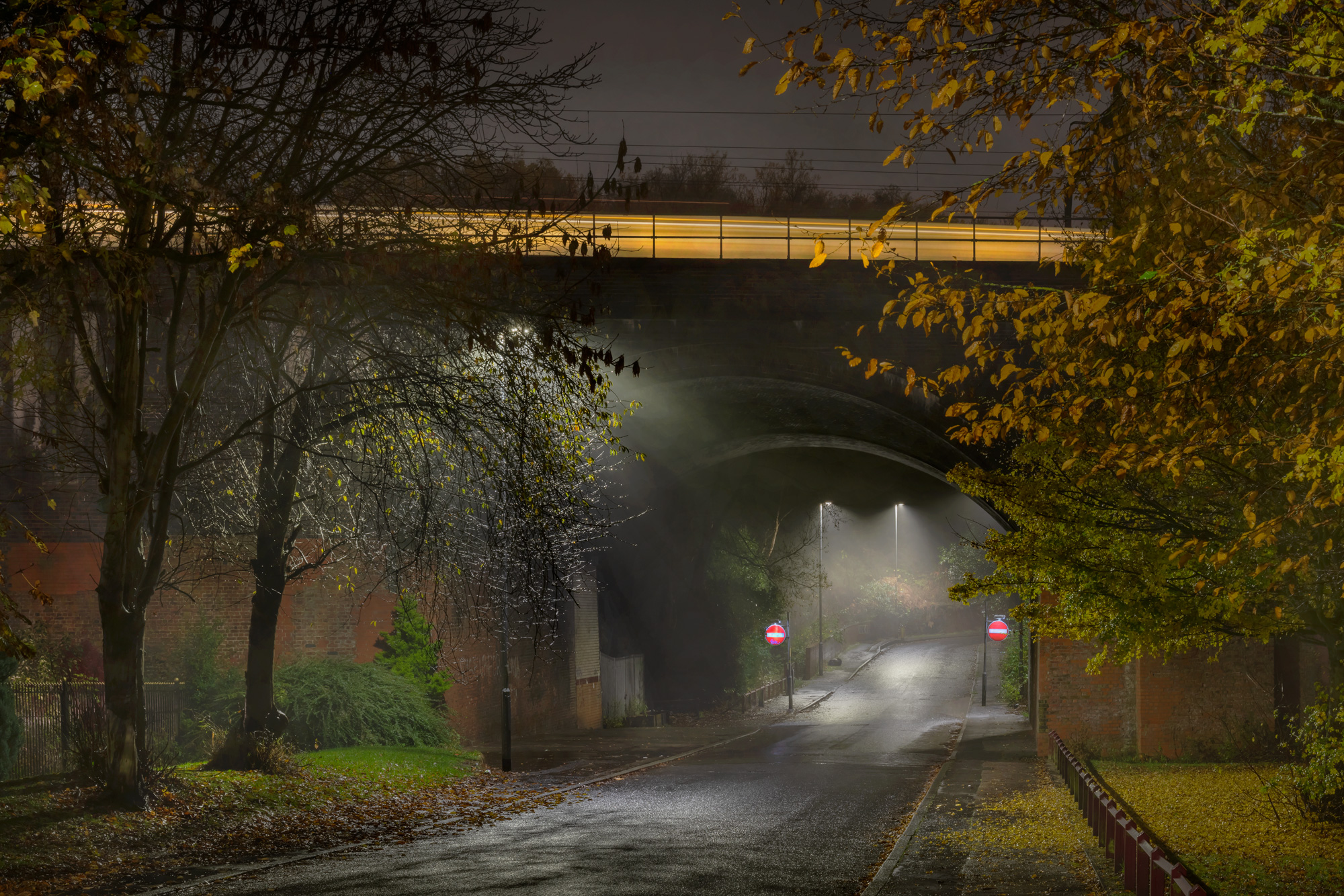 The air was still, and the late Autumn leaves glistened in drifting drizzle as street lights cut wedge shapes into thin mist. Infrequent trams, warm and orange in the dark, trundled by, and distant sirens pierced the soft air. In the row of terraces to my left, perched on a bedroom windowsill and watching me work, was a figure in silhouette, reminding me of a portrait in an old locket.

A fox wandered into view, moving unsteadily, peering about, as if searching for an open kebab shop after a night out. Beneath the arch, two ‘No Entry’ signs shone crimson, dividing the estate behind me from the valley below. Puddles, like grand pans of soup, had formed in pot holes along the narrow road, that curled away into secrecy beyond the black River Irk.

Whilst working in this place, my car battery drained, as if I’d somehow strayed too close to an electro-magnetic field, like in a science-fiction film when an unseen presence disrupts the city grid. And so Matt, the AA man arrived to get my motor started, and I was gabbling on about why I was in this place, when he glanced up from the tablet where he was entering my details, and asked “Do you believe in ghosts?”

I assumed his question wasn’t for company data. Over Matt’s shoulder I saw the person in the window move off, as if not not wanting to hear my answer.

“Well,” I said, “I do think that places have particular energies, and perhaps humans shape that energy. Or, I once heard someone explain that ghosts do exist, but they exist within us, we sort of host them.”

He nodded, saying nothing as he handed me a receipt.

“I think you’ll need a new battery,” he said before departing, “that one’s had it.” 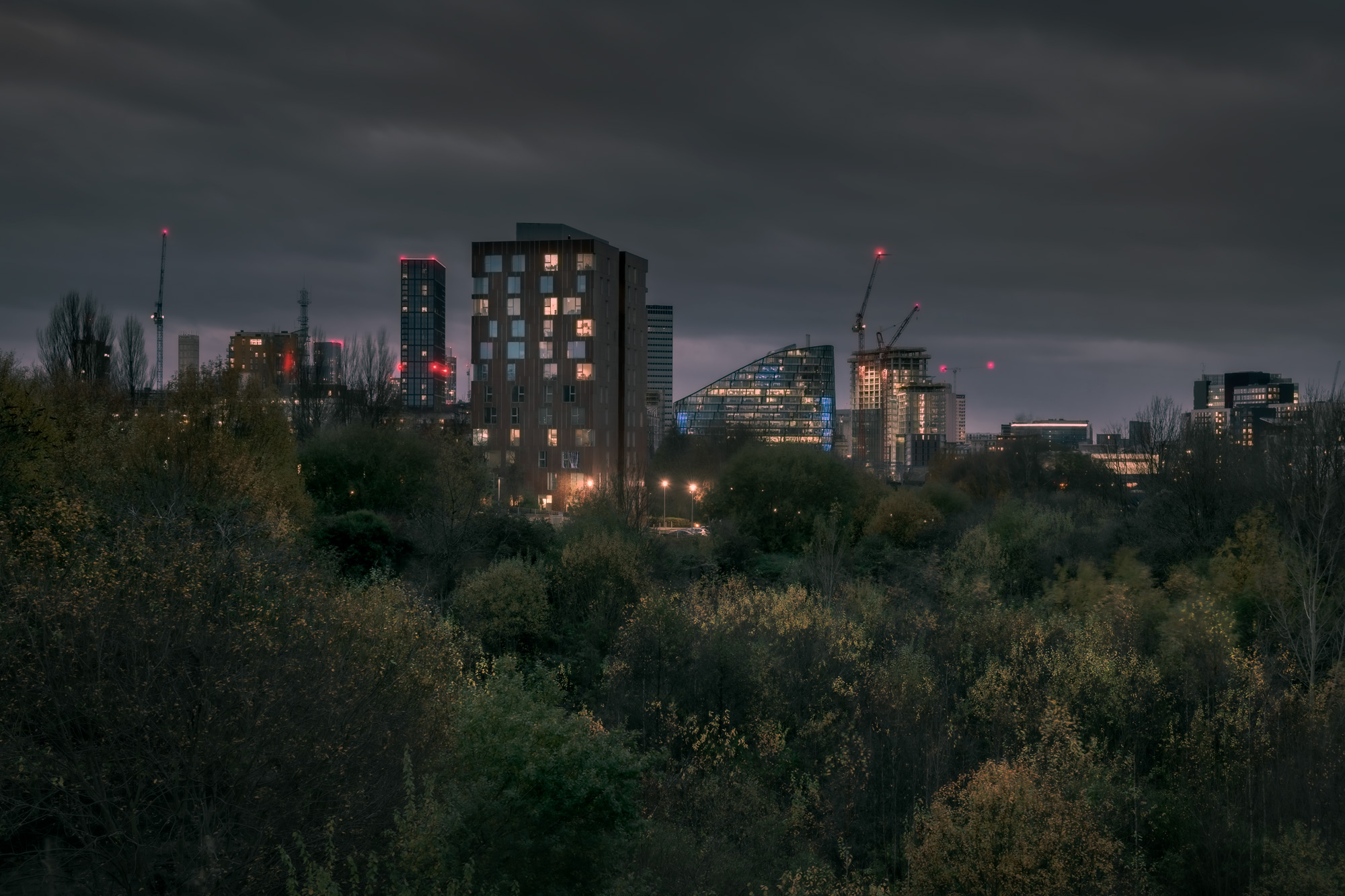 A couple of days later, in the twilight of an early winter’s afternoon, I was at the summit of Improbable Hill above the valley, near the three tower blocks along Rochdale Road that, once they’d been privately refurbished, were re-christened as Pankhurst sisters. The clouds hung grey like an elephant’s stomach over the city skyline, and crane warning lights stung the diminishing daylight with strong red. I heard a Tawney owl hoot softly before issuing its alarm call.

Two centuries ago the rise I was on would lift the spirits, as Robert Tinkers’ Elysium Pleasure Gardens, at the base of the hill’s slope, would draw crowds of Georgian hipsters to dance and drink under glowing lanterns. The sandstone quarry with which old Manchester was built was only a little further beyond. That was before industry began to line the bucolic banks of the River Irk, condemning it to an existence of abuse and neglect. If ever I was going to sense Hades in my city, surely it would be here, and along the route towards Angel Meadow, where forty thousand people are supposedly buried. I wanted to call Matt and tell him this is what I meant when I talked of my ghosts.

I made my way down onto Dantzic Street, and past a sign for K9 doggy day care. Across the road, from a tightly bolted building, and without any other signs of life, I could hear Capital Radio oozing out. On the pavement a fake antique bedside cabinet lay upside down, as if it had fallen through a time portal from space. I added this to my list of other random kerbside objects encountered during my travels through this strange zone: the front of a car; several armchairs; a blonde wig draped over a catering sized oil drum; a family caravan from the 1980s, later burned out. All fragments of dreams sitting within reality. 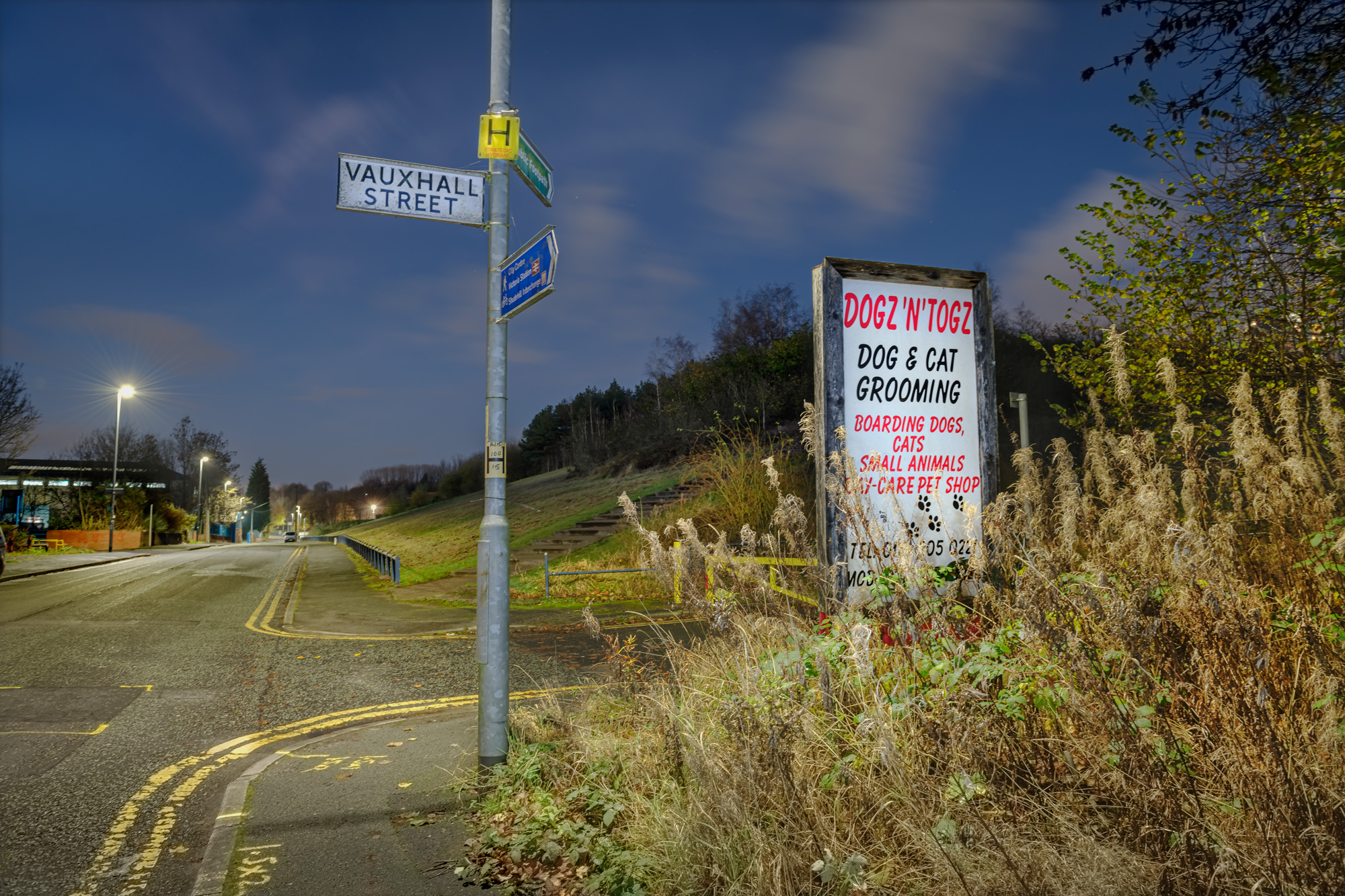 In the distance, clear and sharp, could be seen new constructions that signalled this district’s regeneration as the ‘Northern Gateway’. A fresh breeze brought me the uneasy scent of the river as I moved alongside the redbrick buildings just before the traveller site, now mostly darkened except for a solitary, playful string of fairy lights. On this stretch of road there was little except litter, the residual shattered glass from the theft of carseat treasures too tempting to resist, and tattered hoardings proclaiming a luxury lifestyle yet to be built. Someone had scrawled ‘Vote Trump” in big white letters along a wall shielding the Irk.

I continued under the monumental Aspin Lane bridges, past the Charter Street Ragged School, and up into the shadowed Meadow, lit only by the glow from the CIS building and new apartment blocks, rising hugely from the cobbles. I slumped onto the bench next to St. Michael’s Flags, and closed my eyes, slowing my breath, seeking the ghosts within me.

I must believe in such entities. Indeed, on a cold January night nearly six years ago, my Not Quite Light project was conceived on this very spot, when I allowed spirits from the ancient turf below to course through my veins, inspiring me to consider what my Mancunian ancestors would think of this city today.

I obviously could never know what their judgement would actually be, and so, to explore the city’s transition, I instead embraced their invited, whispering voices, considering it guidance, prompting me to question the choices made by our planners, as the city again colludes with developers to create housing of varying quality for our contemporary citizens. 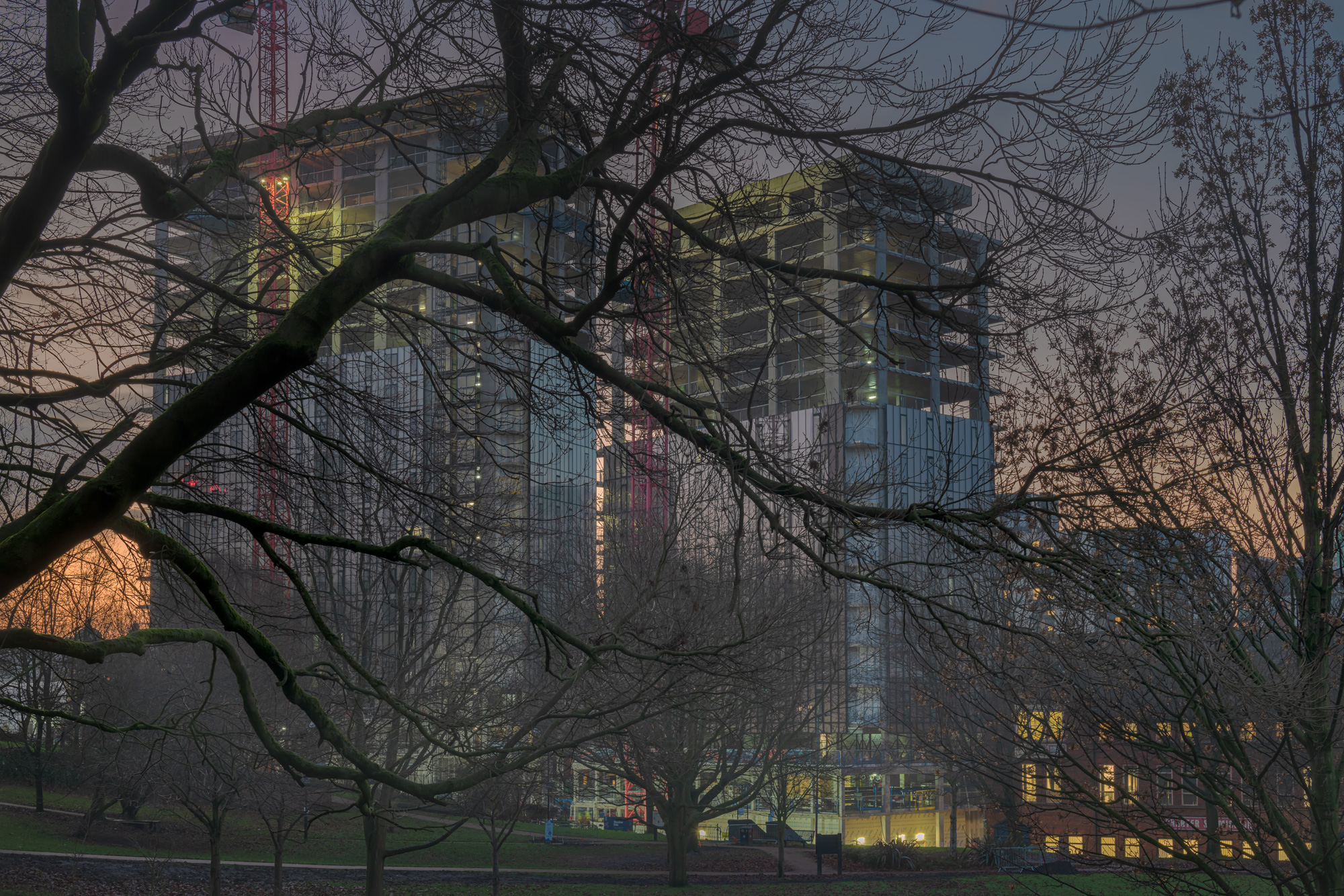 I opened my eyes and gazed over the gravestones, past the trees to the shiny, new tower blocks, financed by far-eastern money and marketed to eager Chinese investors desperate to procure property, as Hong Kong becomes one of the most expensive cities in the world. My first wife was Chinese, and so I learned about their fear of the supernatural, and I wondered if, to help complete sales, the dead beneath my feet had been buried that little bit deeper in the showrooms of that island’s Central district.

I clenched my fists, summoning phantoms to sit with me, to debate the future of the valley, because, despite my love of this extraordinary hinterland, I do understand that it has to change, and that, if not carefully handled, nostalgia can often cloak cities in slow decay. And, conceivably these apparitions would also confront notions of pity, as we can never truly know of life in slums such as Angel Meadow, and pity does not help create great cities. Rather than causing us to listen to the very people who hope to improve their own lives, it can too easily induce the imposition of misplaced ideals. Perhaps these souls would marvel at the shiny towers.

As I sit there, conducting my private séance, the Mather and Platt foundry floats back into my conscience. Thomas Horsfall asked local philanthropists to donate to the provision of art rather than raise wages, as he believed the nourished soul to be as important as food and shelter. The spirits now swirling through me would surely argue that their priorities would not be a magnificent gallery, but a home they could afford, well built and warm, with room to breathe, and food that would bring them good health. This, they might say, is what the city needs first.

And that’s perhaps what it will always need, as Manchester has never been a sentimental, Socialist utopia. It’s always been a hard place, created by Capitalist instincts, and our radical reputation has been earned through being compelled to shove the boot from off the neck. This valley is haunted by countless ventures of such protest against inequality, too readily quashed by violent local authority. 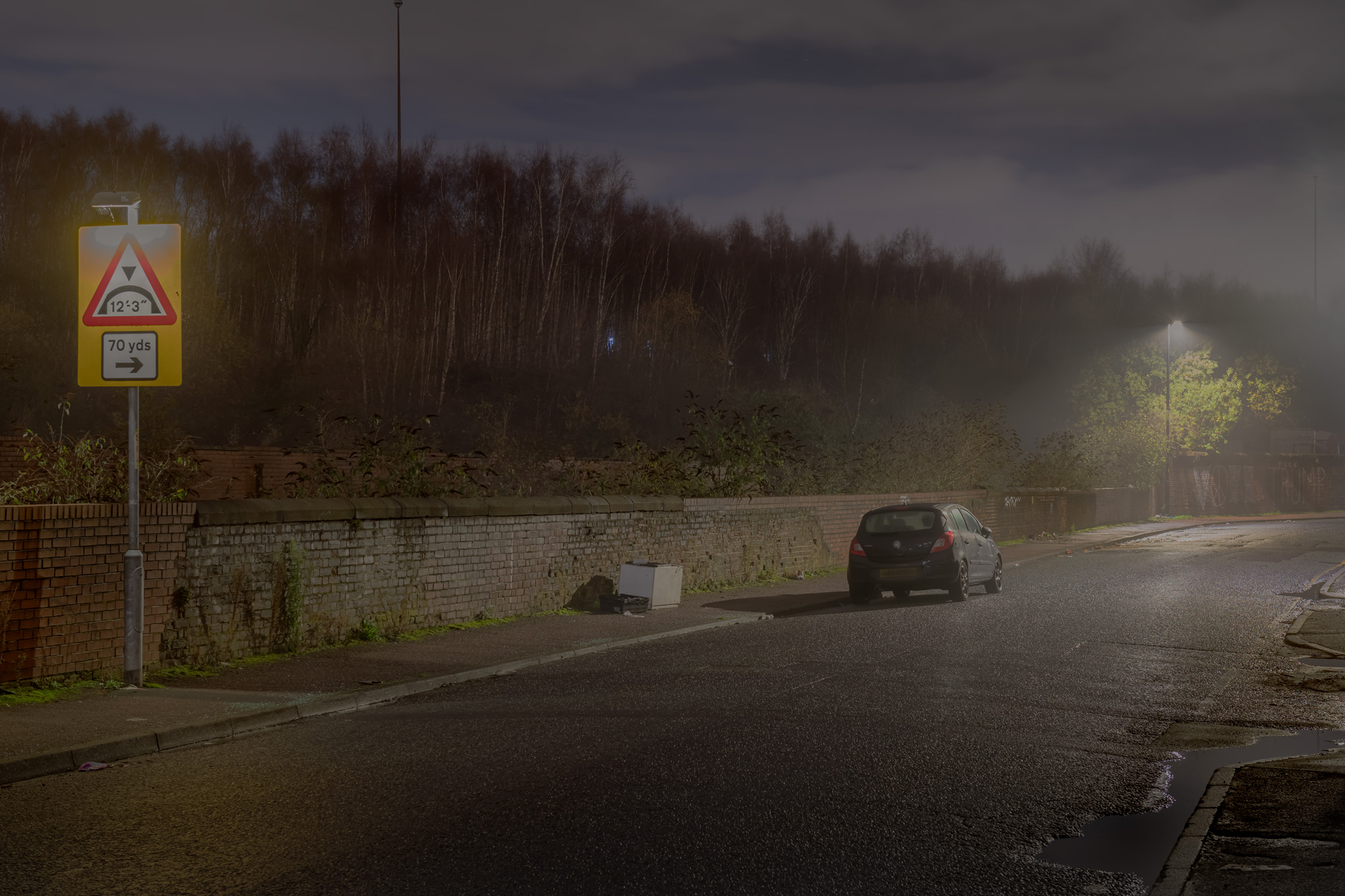 The air chills, calming the querulous spectres. Taking advantage of this hush, I smugly have the last word with myself, arguing that art does have value, and our varying notions of progress could go hand in hand. A building such as the foundry might, for example, be a catalyst for something wonderful in our shared quest for enhanced existence.

My contention goes safely unheard. I’m cold, too troubled by these spirits and their unholy poverty to be content with my thoughts. A late train rumbles by, heading north. The few passengers look down on this land, as they have done for nearly two hundred years. A large firework booms somewhere in the distance.

Change is complex and frightening, the enduring problems within our neighbourhoods too varied for a single solution to be imposed after superficial consultation, whether that be with ghosts or existing communities. The next decade will see a breathtaking transformation of this locality, and it’s possible that before it’s completed, I’ll have already joined the souls I’ve just communed with. A thought, a hope, occurs to me, that one day we’ll somehow be able to visit the living, and they will sit within the city and listen to us, the now certain dead. 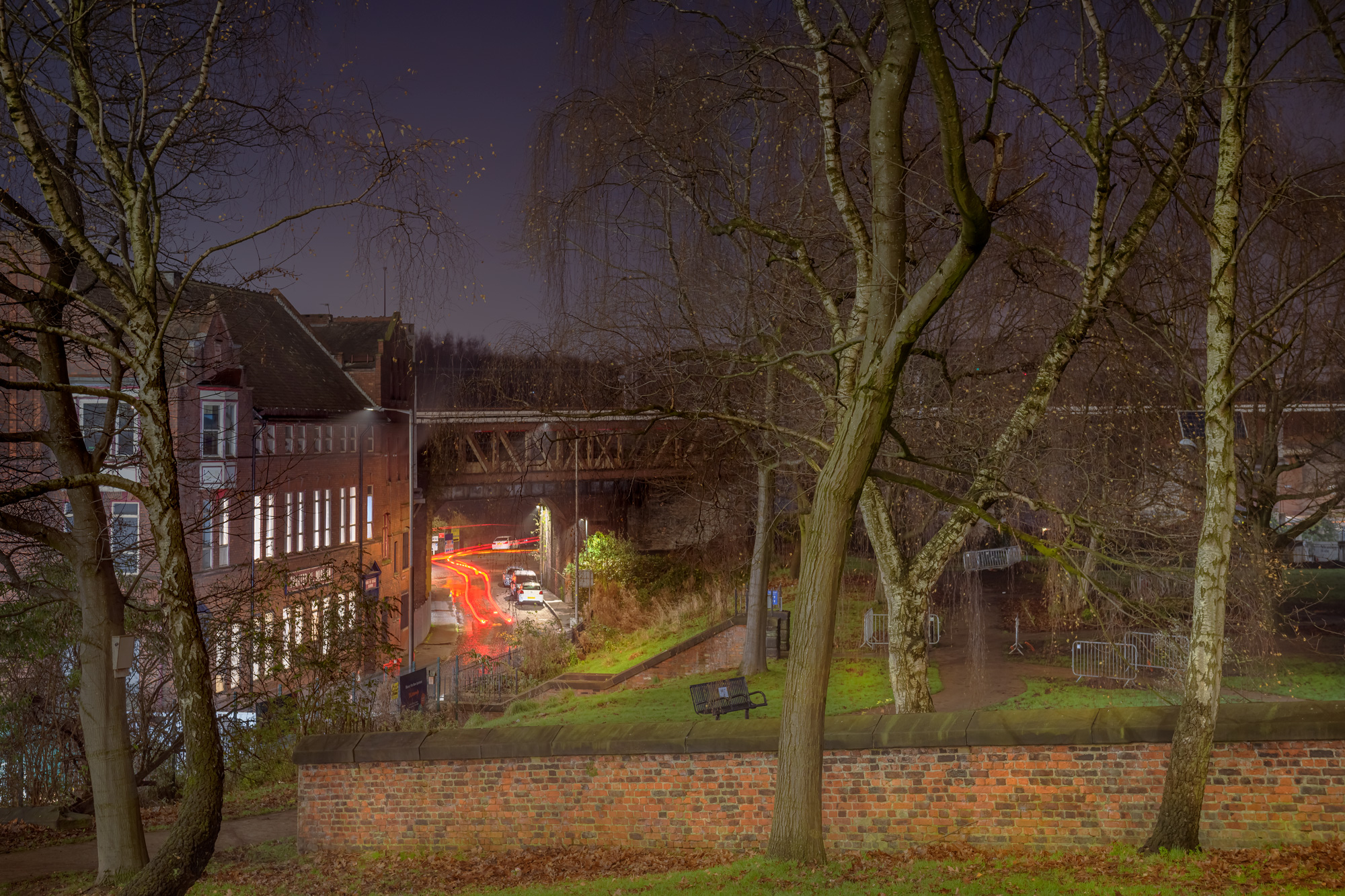