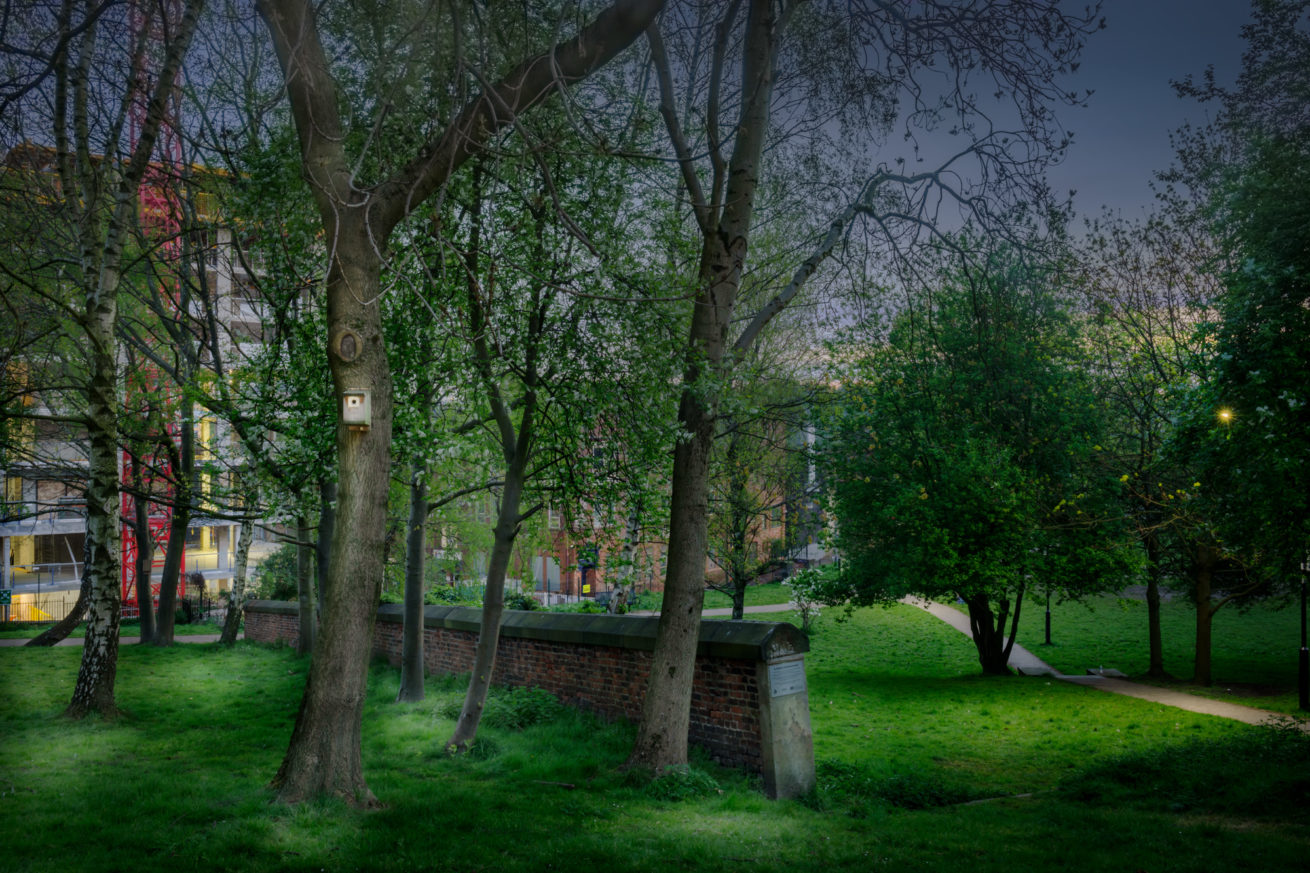 Listen to the birdsong at dawn in Angel Meadow

It is still dark when I arrive at Angel Meadow, just to the north of Manchester City Centre. It is during the time of Coronavirus and, since this unnatural hibernation, I’ve rarely left home. I’m unusually nervous; fearful not of this twilight space, but of other humans, who may carry death in a single breath. I pull my mask further above my nose and follow the path into this ancient ground.

The park falls from a heightened bank down towards Aspin Lane, its grassed soil intercut by paths and trees. Steps made famous by the painter LS Lowry provide a gateway to the cobbled street below, which, in turn, curves away and on under a cross-steeled railway bridge towards the modest, trickling River Irk.

It’s now sealed on three sides by modern construction, and the development plans intend for it soon to be fully engulfed by tall dwellings, a bucolic lifestyle promised within an urban world that may once again come to be populated as densely as it was in Victorian times. Potent finance transmits across continents so that Manchester lives are bound to those of Hong Kong and China. Everyone’s health and wealth connected by hope and desire. 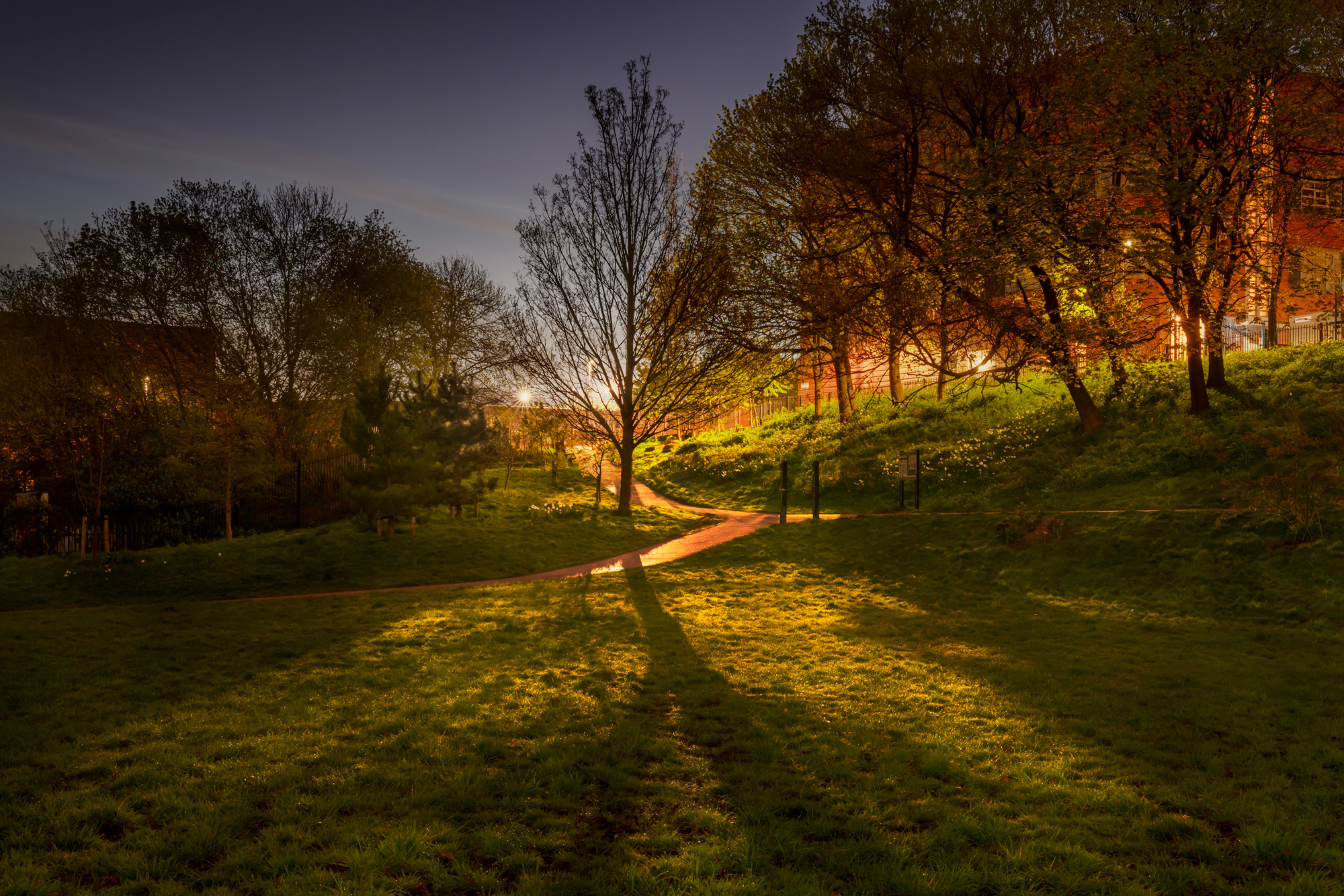 I recently saw in some marketing literature a body part assigned to Angel Meadow – The lungs; as in “Angel Meadow is the lungs of Manchester.” A curious designation at this juncture, perhaps, when we remember that this was also once a mass burial ground for paupers, and that the skeletons of forty thousand people, dead from the infections of their time, exist in the ground beneath.

The air is sniper still as the first blackbirds begin to sing, their volume perhaps emboldened by the reduced hoover hum of traffic. Pure, clear, unknown. They’ve sensed the dawn long before I’m able to see the new day’s diffusing blue. I make my way quietly towards a wall, its middle section overrun by suffocating ivy. It appears to be a useless barrier, hiding little and preventing nothing.

The birds, twittering so virulently, are invisible. They may as well be from my imagination. Trees here are shaped not by shadow, but by the varying temperatures of manmade light. A sudden, soft breeze, warm as a snake, crowded with avian chatter. Beneath me, the souls of ancestors. Life suddenly feels virtual, as if on the tip of my tongue, as though I’ve been absorbed into a flow of fractured energy, and am now existent within a parallel realm.

I’ve often considered ghosts to be within us, a gestation of energies breathed in at birth with our first crying gulp, and then throughout our lives, to be summoned and exhaled during times of anxious uncertainty and spiritual crisis, therefore we’re constantly encountering and consuming the expirations of others. My fingertips stroke the cool soil, tender, beckoning. Burial earth. It is time for silent conversation, inhaling, exhaling, holding hands with the past. 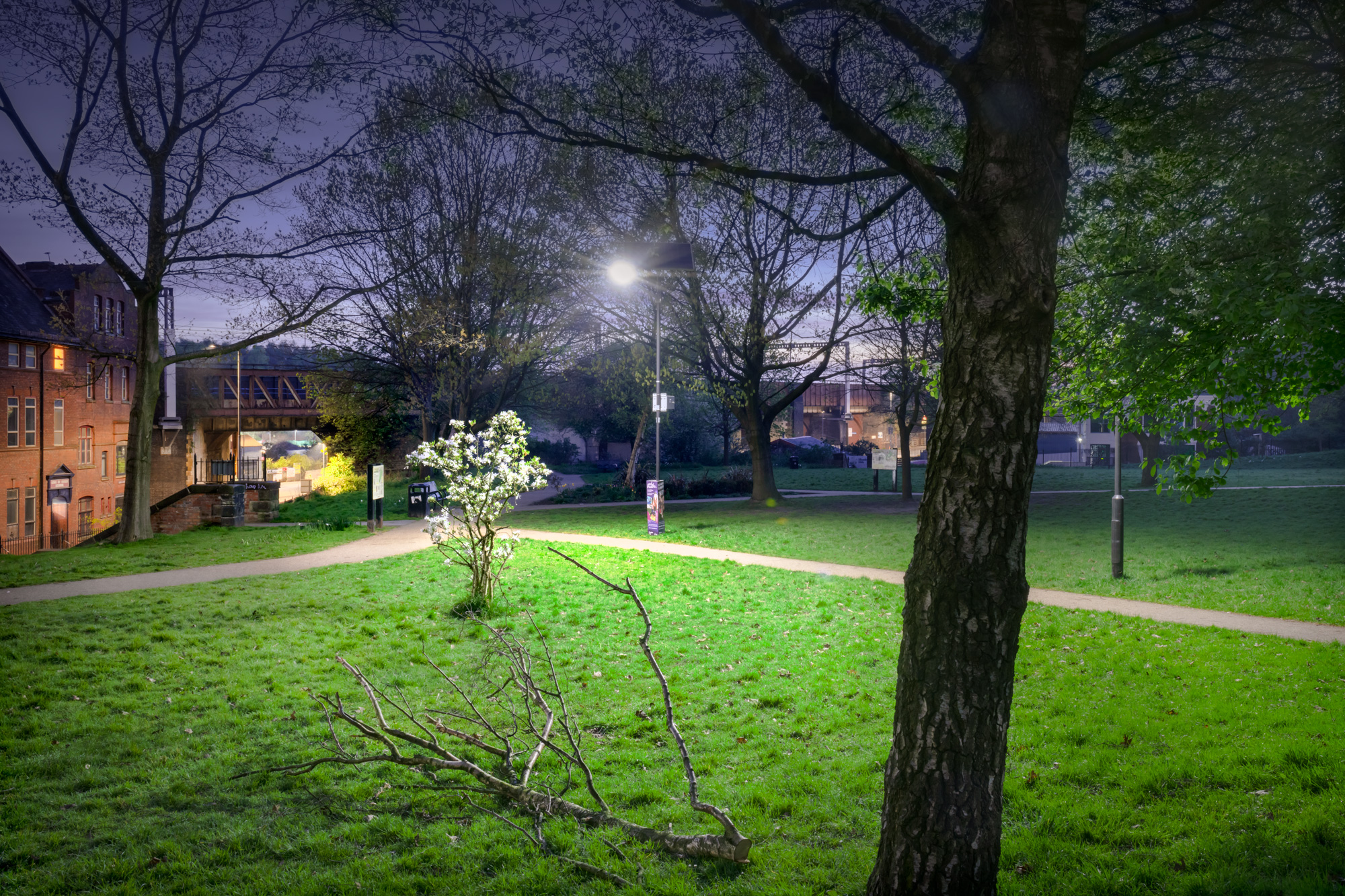 I lie down, my ear flat to the mud. I yearn to hear from those below, to encounter voices of people who’ve lived and died, and so truly understand the variation. A crepuscular chorus from the unknown, a miasma rising, releasing into the current air entrapped tales of vital lives shortened by circumstance. As I rest there, I consider the word pauper. Softening syllables, used to render flesh to skeletal anonymity. Indignity bestowed upon those considered useless once their impoverished bodies have expended all of their energy in the support of discriminating capital.

I breathe deeply. Shared air. Our fevers, their fevers. What would these buried souls think of this city today? Whilst I strain for words from worlds below I open my eyes, and fix on a mesmerising cherry blossom. It is alight, the flowers silvered by an illuminating street lamp just a few feet away. Such transient glory, a sign sent from some God.

Singing engulfs the park, as if a thousand birds or more, awakened by the ascending light, have been allowed voice after an epoch of enforced silence. I feel a release of joy, like pollen exploding from a stamen. I stand to leave, at peace with the ghosts I have just inhaled and exhaled.

But then I think of a quote by someone long dead “what we wish to be true, we easily believe” A few weeks ago, hope surged in me like an African river, a sense that our lives could evolve in this time. But now, as the birds quieten, I descend Lowry’s steps, past the aspiring building sites, and simply make my way down towards the modest, trickling River Irk. 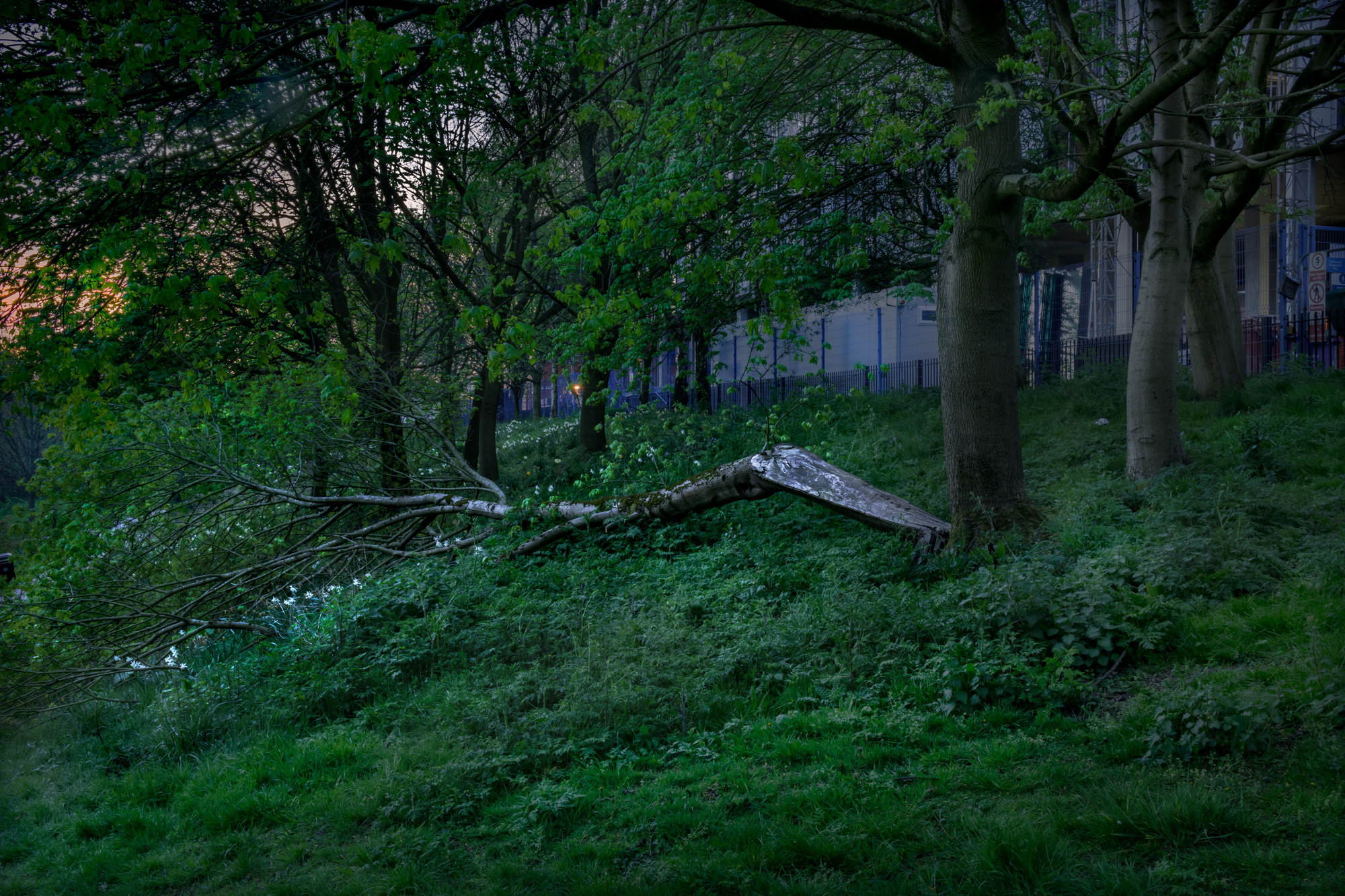