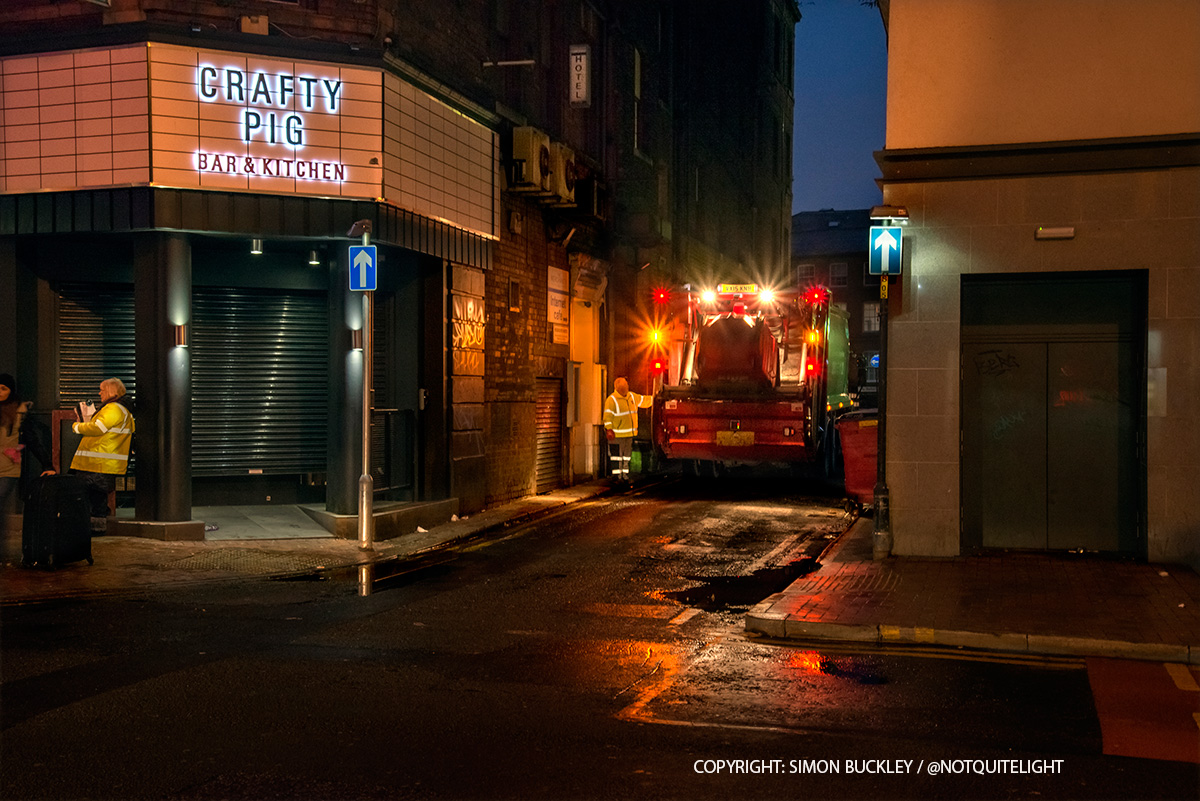 The previous night I’d begun to read The Manchester Man, written by Mrs Linnaeus Banks and published in 1876. It details the life of Jabez Clegg, who was rescued in his cradle from the flooding River Irk, and adopted by the kind and hard working Simon Clegg, and Bess, his saintly daughter. This act of absolute altruism is set against the conditions of work and life that Mancunians had to exist in during the early 19th Century. The book was in my mind as I made my way into town, and so I decided to visit Oldham Street to observe the present day folk of Manchester return to their places of labour on the first day after the Christmas holidays.

It was resolutely overcast, and the dawn was slow to emerge, the sun as reluctant to rise as a worker from a warm bed. Gradually buses began to fill the damp streets, and people clumped their way towards Piccadilly, shoulders bowed and earphones blocking out the sounds of life around them. I was outside a coffee shop when a bus pulled up opposite me. The driver sounded her horn a couple of times, signalling to the young woman in the cafe that she’d like a coffee. She turned off the engine and made her way over to the tables and chairs that had just been set out on the street, where her drink was waiting for her. I watched them laugh and chat for a few minutes before she drove off with fresh passengers.

I wandered towards Piccadilly. A car started the wrong way up the street. Another driver put his head out of the window and patiently told the owner of the errant vehicle that he’d need to reverse, which slowly and reluctantly happened. A teenage girl, struggling with her cases, emerged from the hotel across the road looking lost, and a taxi emerged from nowhere to rescue her.

In Back Piccadilly a refuse truck, its lights as shiny as those on a giant Christmas tree,  began emptying the bins from the weekend and the shriek of empty bottles being tipped into belly of the wagon trumped all other noise. The operator stood passive and stoic as he hoisted bin after bin into the air. He leaned against the battered metal and watched the crowds of commuters walk past, oblivious to his efforts.

After he’d moved further up the lane I made my way over, passing a woman standing in the doorway of the shuttered bar who seemed to be monitoring the buses. In this narrow artery, behind the bars, cafes and restaurants, the fun and pleasure had mutated into an unpleasant odour that would have been recognised by our Victorian forebears. The garbage man wasn’t going to be able to take it away either, no matter how hard we worked.