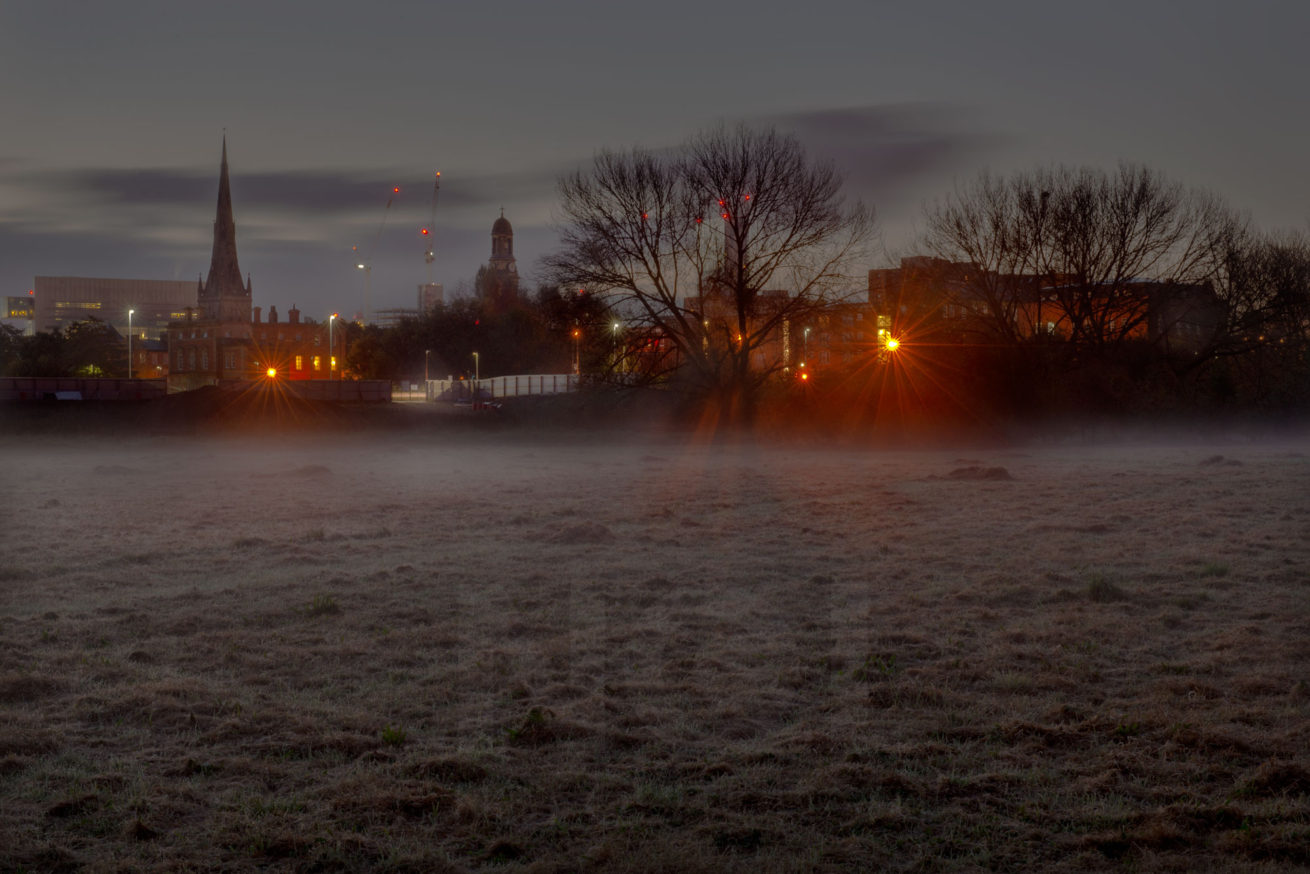 To reach Salford Meadow you have to zig-zag through small streets past newly built houses, where cars glimmer in drive ways just big enough to contain them. It’s obvious which are the kitchens and bathrooms in these homes, as they are the only ones lit. People briefly appear and swig swiftly from mugs, or materialise upstairs as monotone bulks behind frosted glass.

I parked at the end of a fancily illuminated footbridge and made my way down a path onto unkempt grass, silvered with frost, my boots crumping into the pasture as I walked. A gentle mist drifted across the surface and, from the nearby banks of the Irwell, birds cried out freely into the keen morning air with a repeating caw that reminded me of Morse code.

This piece of land is an ancient site. Ancestors long ago established settlements nearby and hunted along the banks of the river, where, beneath the Crescent, it twists and turns like the pipework of a Tuba. Apart from the agitated birds it was quiet, the only sound that of my mind processing the view before me. Cranes, latent building sites, the twin towers of Salford Cathedral and St.Philips along Chapel Street, the ever present Beetham Tower lurking in the distance, trees soon to lose their foliage. 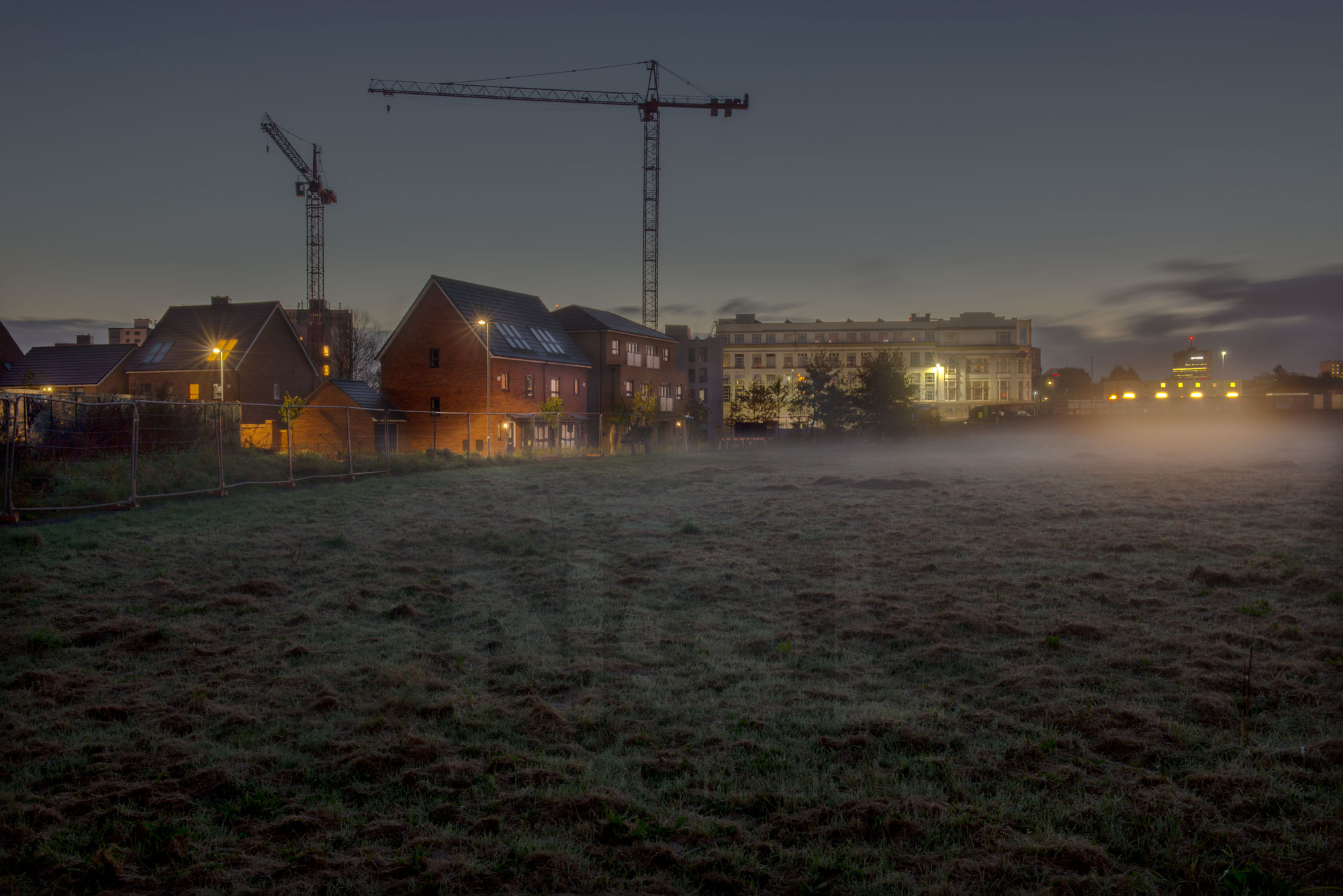 A middle aged labourer arrived onto the building ground where the new estate buffers up against the meadow. He pulled clumsily at protective fencing, whilst around him young professionals left their newly constructed dwellings. Front doors thumped shut, coat collars were turned stiffly up against any chill, fingers fumbled with clinking car keys and no-one cared to notice the bucolic scene just beyond their walls. It actually caused me to feel a momentary pang of sadness, to see these life denying commuting rituals.

A woman, with an expression that suggested she wasn’t a morning person, arrived to walk her small terrier, and a Chinese man began slow stretching exercises before setting off to jog sensibly paced circuits. Then an older man, pot bellied and listing slightly with each step, made his way slowly to the centre of the field, where there were cold, block shaped benches. He sat down on one, maybe as a form of penance, rested his hands on splayed knees and stared up to the sky. The cast of this odd ensemble was completed by the entrance of a bespectacled, shaven headed man in a green quilted jacket, his scalp glistening under the streetlamp. He held a clipboard and, after glancing at all of us, began to fill in a form. I wondered what he had been briefed to survey and what his conclusion would be. Perhaps I was the only abberation in this scene.

As the sun climbed high enough to nudge out the lights, the official turned and departed. The jogger plodded on, mist still clinging to the grass tips. I cupped my hands around my eyes so that all I could see were the wisps of brume, trees and the Crescent. It was the best I could do to imagine Salford as it was, before great industries invaded its territory. Behind me a car alarm punctured the chimera. I looked around to see cranes begin to move, their red warning lights false stars in the dawn sky. My Chinese athlete went past again and, for the first time looked up and smiled. 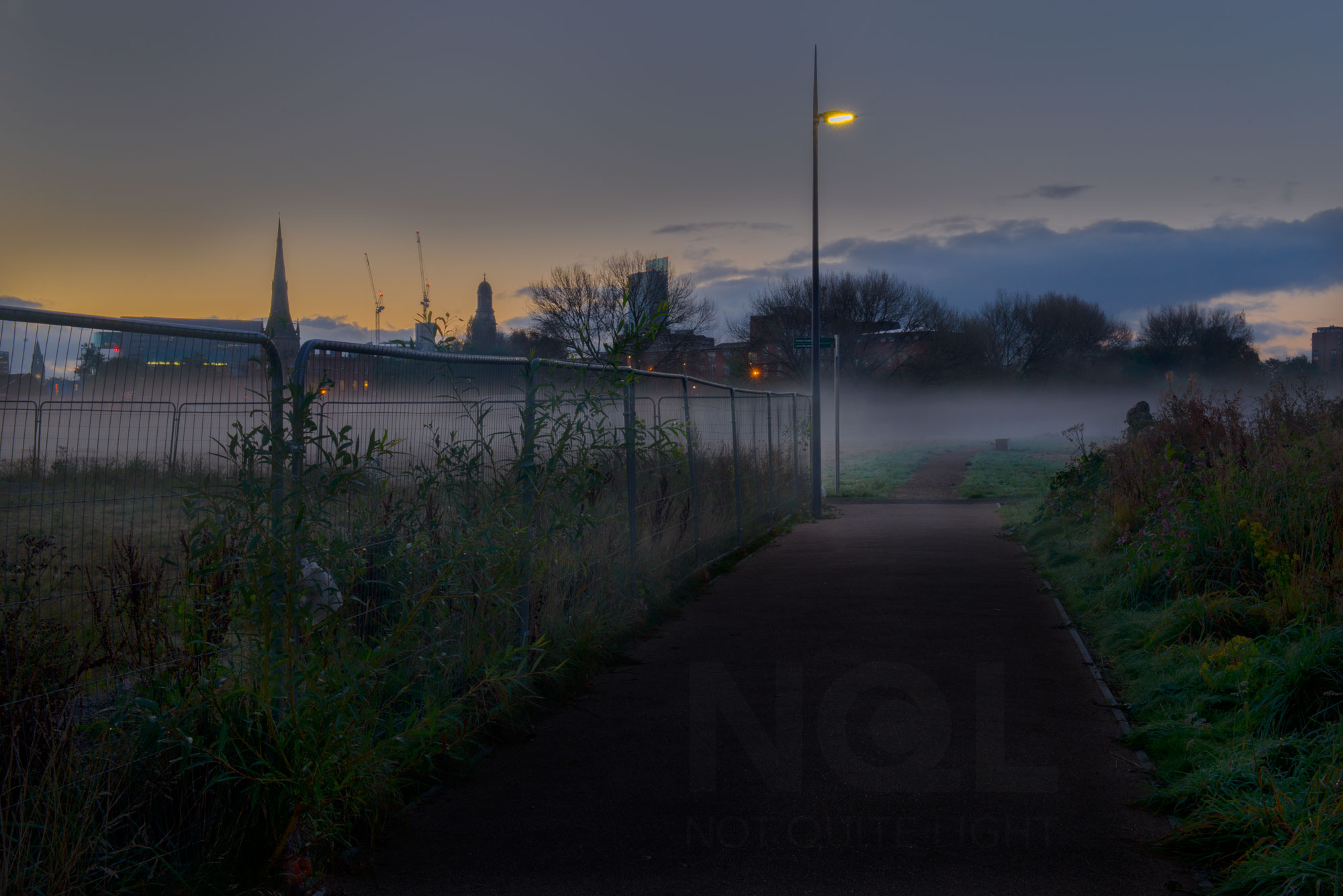